I got into NU mainly for Myrene Academia’s Not Radio show. I used to record the show on blank tapes, or if I’m feeling sneaky, I would use my dad’s Paul Mauriat albums instead. That was a sacred hour back then, and sans internet or the budget to buy Spin or Rolling Stone, I was just hoping I could read more about the bands Myrene played on the latest issue of the then local rock bible, Rock N Rhythm. That show introduced me to Pavement, and when the song Unseen Power of the Picket Fence from the No Alternative record was played, I was just way too certain that I was never going to get into conversations such as which Guns N Roses album was the best anymore. I’d assume to be a big NU107 listener during college, in my dorm room, on my mono-speaker radio-cassette player. This was already post-grunge, and LA105 was rotting badly by taking in and playing just about any band willing to submit a demo. Any rocker now listened to the station by default. On the campus front, just to give you an idea of what was happening then, I got to see the early incarnation of Parokya ni Edgar during the fair, and Yano during a protest gathering. Later on, the kupaw bands started to mushroom, and I got into a noise band with Tado.

Surprisingly, one of my most personal NU107 experiences wasn’t even music-related. I would always listen to Zach and Joey in the Morning, and eventually found myself participating in the morning show’s chatroom, which was the first thing I did at work at my first job. A fanclub slowly grew out of that. I went to the group’s EB’s, and got my hands code-dirty by producing an online forum for the group. I remember Joey toured a few of us when they transferred from Strata 200 to the new offices, and my buying a bouquet of roses for her birthday, delivering it myself, in behalf of the group. I was there during an anniversary or two, and I was also there when the show aired for the last time. 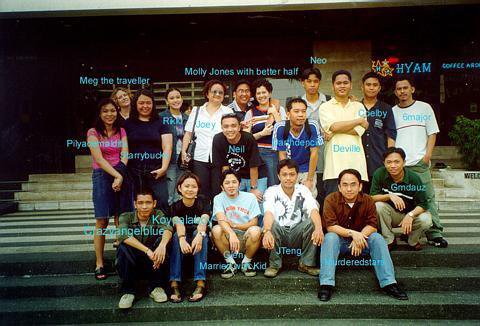 The Zach and Joey in the Morning fan club in 2002, with Joey and newscaster Rikki (Lana from Jam 88.3 now); me in brown

I was sure I would’ve regretted not going to the NU107 studios last Sunday. It was a photo-op, of course, but I intentionally only brought a small point-and-shoot with me to photo-document. I wanted to see Myrene, I wanted to see Zach, I wanted to see Francis, not as their musician-selves, but as music-influencers. I didn’t know any of the new jocks, but I’m sure the present generation looked up to them, like the older rockers did before. It must be said, too: the last batch of lady jocks were quite a pretty bunch. Lastly, I’ll confess that I’ve always wanted to be an NU107 DJ, ever since a friend’s sister back in college referred to me as that boses-DJ guy who was calling her ate on the payphone. Hence, my irregular podcasting. Now how can anyone else have rock-jock dreams now?

To end this post, I’m sharing songs that defined my NU107 listening experience: