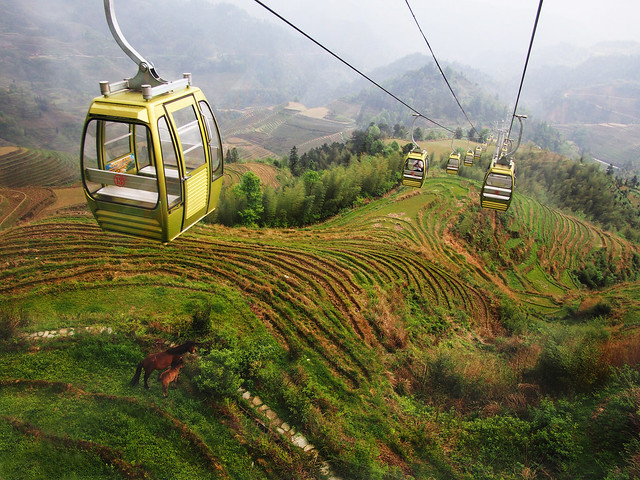 Without referencing to the plane ticket, my email inbox, and a calendar, I would just say the decision to take a solo trip to Guilin went through because an officemate helped me book my flight online the night before my trip. I remember finding myself in an airline office just a few hours before that, retreating after finding out the rates were double than what I found on their website. I was just glad I was at the Pudong airport for domestic trips late Thursday afternoon, having left work early, though I wished I could’ve taken the train instead. See, I like trains. I went to Beijing, and I went to Xian on trains. The crammed, stressful haste of flying just couldn’t compare to the serenity of a train ride.

It was past midnight on a Friday when I was greeted at the hostel. My skin was feeling Guilin’s humidity, a sharp contrast from Shanghai’s current spring chill. I told the front-desk staff I wanted to be on the tour for the rice terraces the day after. I wasn’t sleepy at all. The excite, the minor thrill of this sudden decision for this short work vacation hasn’t sunk in completely yet.

Woke up next to an empty bed on a twin-bed room the day after. Blame in on Filipino paranoia, a slightly skewed sense of security and trust, that I find it hard to locate myself in a hostel dormitory with strangers; also, there’s being single, and not possessing the current luxury of like-minded friends. The room looked the same as it was shown online: rustic, with cute hand-drawn art. The toilet didn’t seem to stop filling its tank.

Propped on the passenger seat next to the driver of the mini-van for the trip, the conversations behind me consolidated into one, and it became apparent I was in the company of Hong Kong International School students, and two solo travellers, who, I can just imagine with surprised looks and cheery grins, since I didn’t bother to look back, found out they were both and from Canada. 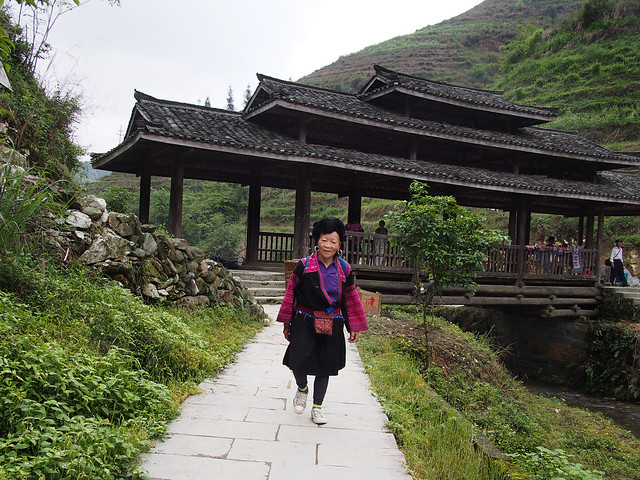 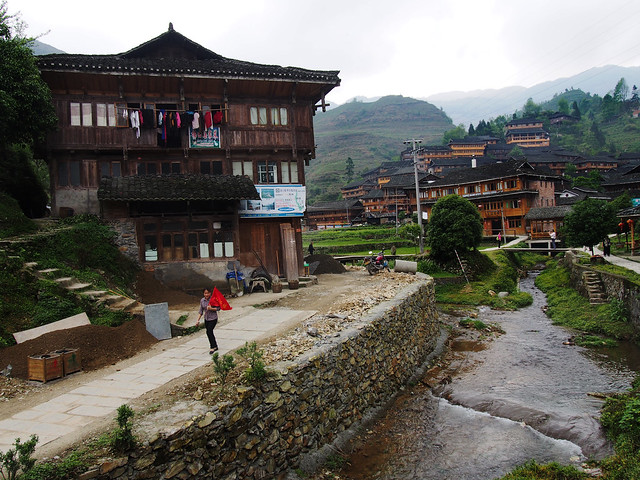 Tickets were bought around two hours later, and somewhere along the way, the tour driver turned the stereo on to something I later found out would’ve been familiar local music fare for everyone: songs with an antiquated Euro-beat, and generic Mandarin pop-singing. The mini-van was now filled with restrained reactions, but someone did politely ask the drive to turn it off.

The village inside the tourist attraction didn’t appear to be teeming with tourists for that day, but the varied inn signs I was able to read in English may indicate that, yes, you really can’t vouch for some sort of site and culture authenticity here. The literature I was able to read on the place boasts of beautiful rice terraces, and village women who wore their hair very, very long. Group pictures were taken, and Ariel, the Chinese-Canadian girl who spoke Mandarin, tugged me in to the frame, since I was being my usual snob-self.

My breaths becoming shorter and shorter, and my will being tapped by memories of a dreadful hike at the Great Wall in Beijing several years ago, I told the group to just continue making the climb, and I will be just heading back, to take a cable car to catch up. This was, oh, just after 15 minutes from the foot of the hills. I fancied the walk back to be some sort of walk of shame, but I felt I was just too old to care. 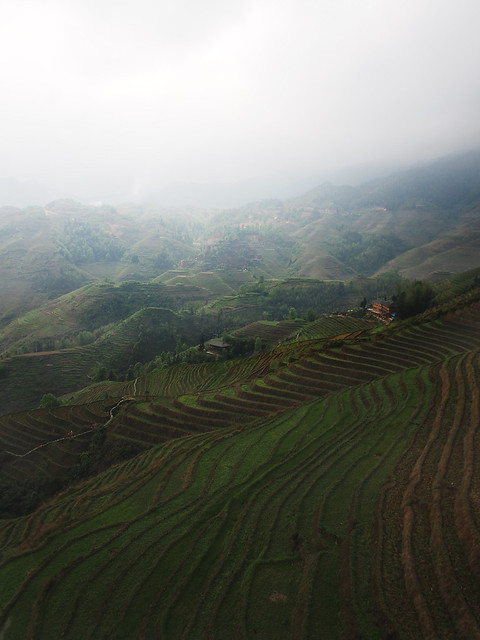 There is a photo on my new camera where I took a photo of myself to cement into pixel memory the utter look of fear being trapped in a cable car. Sure, I feared heights, but the creaking noises from the thing felt like it was a mocking of teeth-grinding which I would’ve resorted to, but I also had to take pictures. The view was beautiful, and it was certainly no mistake to be where I was at that time, and I wished there were other people in the other cars to make a better photo.

I caught up with the group, they were having some rice cooked on bamboo. Bought some handicraft souvenirs with my lady officemates in mind, and took more pictures. It was still spring in most of China, and it would’ve been a better sight if the sun overpowered the terrain, but that shouldn’t be a reason to complain. A now-calm mindset gave me an idea about my trip down: I should listen to some music. I did, and I took a lot more photos this time. It felt like one of those travel channel episodes.

Lunch was had, though I resorted to just a lukewarm softdrink bottle quench, since I was just coming out from a then weeklong diet. The trip home was quiet. Somehow, after having arrived at the hostel, the solitude I usually resorted to with my occasional trips, and not necessarily enjoyed, was long gone, and I found myself having dinner with the Canadians. The other Canadian was French-speaking, but Chinese-blooded Raymond. It turns out they had a very similar China-tour itinerary. After listening in to their plans for the next few days, which seemed a lot more satisfying than just going along the hostel tours, I asked if I could join them, at least for their Yangshuo plans.