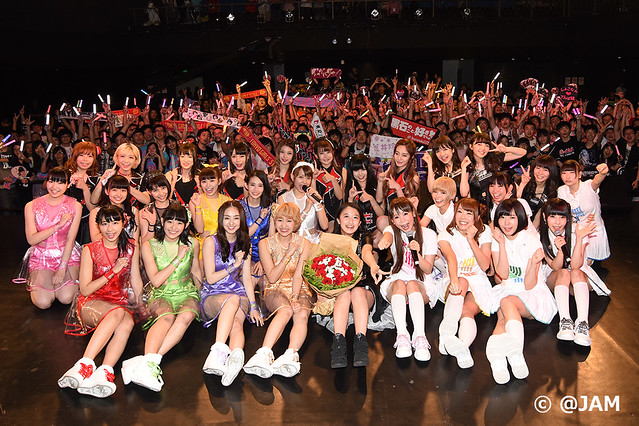 @JAM was a Japanese idol event held last June 28, at the QSW Culture Center, where I had zero chance to take out the camera and shoot the concert.

You must know I’ve already gone to Jpop concerts before (Perfume, Kana Nishino), and I went to Hong Kong for both gigs. I even caught a local gig for SNH48. I’m too old to even put these acts under the guilty-pleasure files: I unabashedly enjoy them, and there’s really no visible end in sight.

So, here’s a breakdown of the performers:

They lip-synced, and half of their songs sounded more Kpop than Jpop, and it was a jarring combo. Pretty ladies, though.

I have not known of SUPER☆GiRLS beforehand, but I wasn’t that surprised to know that the music was the standard, manic Jpop fare. Their performance was more than engaging, the dancing was fast and frantic. They didn’t scrimp on the collective beauty as well.

Dempagumi.inc is supposed to be on the cool side of the idol world, with members being self-professed otaku themselves. Knowing this, I still can’t say I’ve naturally gravitated towards their hyper music. They put up a stellar show nonetheless, and seemed to be the group most people were looking forward to seeing.

I would have hesitated shelling out money for this gig, but it wasn’t that hard knowing Tokyo Girls’ Style will be there. See, I’ve followed this group since 2010, and have always fancied how the music sounds Jpop retro without being dated, and the funk infused songs were plenty with each album. They had a delightful performance (sans one member), and I would’ve wanted to get nearer the stage -since I was just about 5 rows deep, a little off-center, which was actually a good position considering I got the cheapest ticket- but I decided to settle where I was. Also got this from the merch table:

Yep, a pink towel. Came a little too early for a non VIP ticket holder, but no matter. I can hear Nihonggo a lot more here vs. the Japanese rock gigs I’ve been to here in Shanghai.

The audience -with a good number of Japanese in there- were loudly singing her songs, and I just couldn’t get into it. Otaku poser radars would’ve gone off the hook by this time. Later on, she performed along with Dempagumi.inc, and I assume the song below was included: