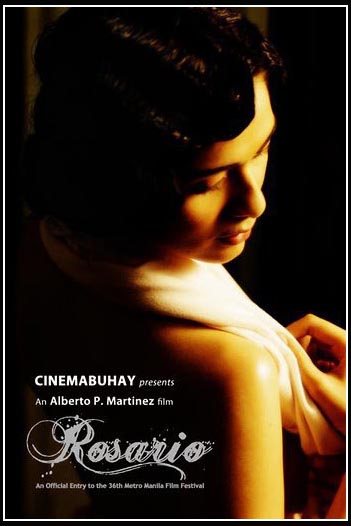 Set in the 1920s, Rosario is the story of a liberated laking-Amerika haciendera, grand-lola of grand-businessman Manny Pangilinan (we can do without his cameo, but that’s nitpicking already). We witness how Rosario falls for a man out-of-her-class, have kids with aforementioned man, grows weary and weak with temptations constantly hovering around her, and by the end of the film, one would see that all that hardship made her wiser. Clearly, its not that bad a story.

Was the story not taut enough to translate to film? Maybe so, but with someone who understands the language of cinema, I see potential. Instead, this serving offers weak dialogue and leaves minimal space for any sort of development (story, character), though we’ve probably checked our watches constantly by Rosario’s third man (its a two hour movie). Did you know that Alberto was an auto-mechanic, and that Carding was an aspiring writer? The official website tells you so, but not the movie. You’re left with too many mentions of Nueva York in the first 30 minutes of the film. Maybe that’s it. There was too much dialogue delivered, not enough visual storytelling.

The film did get interesting when Rosario abandons her folks, and decides to raise and take care of her family in Manila with Vicente (Yul Servo). However, when Alberto (Dennis Trillo) enters the story though, you get two moments of hilarity: successfully luring Rosario to ride his car, he walks out in the rain with an open shirt, exposing a muscular torso, to check an overheating motor, an already obvious prelude; and an all too familiar CGI-made pier departure scene as the erring couple depart for Hong Kong to serve their adultery sentence.

As far as who among Rosario’s men are believable, I’ll grant Carding (Sid Lucero) that title, who meets Rosario after her exile, and since money is now scarce for Rosario’s family, would constantly have his laundry done by her, so they’d have their neighborly time together. By this time, it was still shallow and flat, even at this chapter’s climax. Then we see Dolphy again in the current time, Rosario’s bastard son, movie narrator, granting us plot closure.

Jennylyn was the best choice for Rosario, and she must be noticed from hereon. Lovely and sensual sans much effort, she had become the only salvation of this big-scale movie from its own hyped reality. I’ll give that erased statement more thought, thank you.

I did hope to be provided something decent by director Albert Martinez, having had the plum roles of movies done by our better directors. The impression that lingered was he had the necessary ideas to make this a good film, but this was just too big a job for his screen debut behind the camera. Promising? No, not with this one. This was really sloppy filmmaking.

It feels like my close online social circles commend the movie, and go as far as joining in those who decry the snubbing it recieved from the Metro Manila Film Festival. Well, let me cite a few points:

The Metro Manila Film Festival is not a REAL film festival. Do they accept movies based on artistic merit? No. They cite 30% of the criteria for Best Film should be re “family values”. They had common-folk (a student, a public school teacher, a bus driver) to comprise part of the judging committee. They fully accept the movie franchises offered by Vic Sotto, Bong Revilla Jr., and Kris Aquino into its roster, every stupid year. This is all showbiz fodder, nothing more.

If current international filmfest darling Brillante Mendoza submits an entry, would he even stand a bloody chance?

If the offended’s point is: how can those who won beat Rosario? It must be the best film from those nominated (probably is), so how can anyone not be pissed at the results? I’m not, and it’s not because I find fault in it, but because its useless to make an argument, considering how whacko the setting has always been, year after year after year.