There were  two concerts by international acts in the past three decades that I take great pride to have attended: Rage Against the Machine  (1997), and just recently, Deftones (2011). The gigs with Club 8 and Shonen Knife come close, and there were the should’ve-been-there’s: Metallica – 1993, Pearl Jam -1995, Beastie Boys/Sonic Youth/Foo Fighters – 1996, Nine Inch Nails – 2009. Stuck in 90s music? Not really, but maybe writing and relating the experience I just went through the past week by starting with all this may make everything else after a little easier to understand

There were few post-2000 acts that made a significant dent in my music consciousness. I did keep tabs on what music was current, and what made the critics sing in praises. By 2006, I actively participated in the local music scenes by doing photo-documentation of the better bands out there. By 2007, my discovery of post-rock music was taking a good hold of what I listened to daily, and some of the bands were Japanese. My previous impression of Japanese music wasn’t of high regard, but I got curious, so curious I went out of my rock music comfort zone, which I somehow reluctantly confessed over this post: I Don’t Think It’s A Phase Anymore: On J-Pop.

I love Perfume. There. The music can speak for itself, but as a fan -a self-avowed previously-reluctant, but now bordering-on-obsessive fan- there’s a lot missed without the visual experience I’ve seen from their music videos, concerts on DVDs. The members of the group are in their early 20s now (they started in their pre-teens around 2001, by themselves in actor’s school), and realizing that has always made me aware that I really, really should find a way to see them, really, really soon. 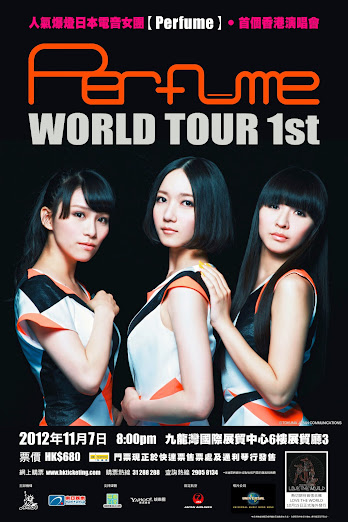 The news of their world tour was overwhelming. I’ve had thoughts previously of going to Japan, but now knowing that they would be performing in places where translating that thought into action wouldn’t be so hard to undergo, I knew it was about time. It was all a matter of deciding where: Hong Kong, or Singapore. Hong Kong was instantly on top of the list, assuming it would be the more practical choice, despite the odd weekday scheduling of the concert. It was also going to be held before Singapore, and I’m not sure if I can wait.

Finally deciding on Hong Kong, and purchasing the ticket online, I didn’t think things would be any difficult after. I haven’t been to Hong Kong, but I figured there wouldn’t be much of a significant difference from Shanghai. Then this happened. The possibility of cancelling the concert was not remote at all (there was one Japanese act whose gig was cancelled during the height of the conflict), and what was supposedly a sure thing, now isn’t. I should’ve opted for Singapore instead. Then, ticketing info for the Singapore leg of the tour broke: they have a balloting scheme for online ticket purchased. Easily put, you have to win a ticket from a lottery.

The plane ticket and accommodations secured, three-day work leave approved, the only other important matter was I hadn’t decided on what else to do in Hong Kong. No Disneyland for me, and I’m not so intent on doing photowalks either. I figured the itinerary can just prepare itself later on, as I had to meet a few singing-and-dancing girls first.